Round table on the topic of the European Security Policy 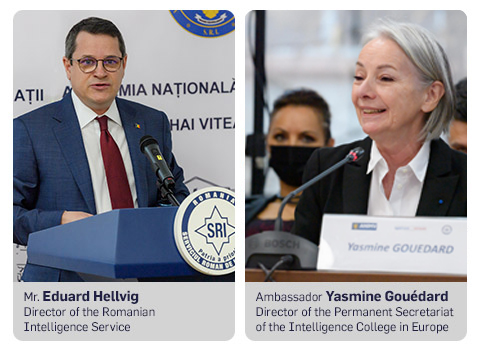 The event was hosted by "Mihai Viteazul" National Intelligence Academy and is affiliated to the French initiative La Fabrique Défense which aims at developing a common strategic culture for European youth. Threats against both national and European security were key elements in Mr. Eduard Hellvig's speech. The SRI Director spoke about the need to focus on the European Security Policy and, also, about the pivotal role of the Intelligence College in Europe in promoting a common strategic vision, academic excellence and a proactive approach to threats.

"Building strategic partnerships remains the cornerstone of the European project. The security threats which we face together in Europe, the common goal of developing forceful, responsible and appropriate reaction and response capabilities, based on democratic principles, is what unites us in our endeavour. That is why I believe it is necessary in the following period to encourage the development of a more consistent cooperation on all levels at our disposal - institutional, academic and diplomatic", stated the SRI Director.

During the talks, Mr. Eduard Hellvig pointed out the importance of raising awareness among all actors, both organizations and citizens, with regard to threats such as propaganda, misinformation, social polarization or extremism, which can only be countered by the active solidarity of citizens with their own national intelligence community and by strengthening educational efforts.

"I hope that the College, as well as other platforms with similar goals, will continue to expand and refine their programs so that together we can become stronger and better at addressing threats by means of sustainable security practices", the SRI Director added.

Ambassador Yasmine Gouédard described the concept of common strategic culture and the role that the College plays in this system via three pillars: the academic program, thematic seminars and public awareness activities.

Ms. Yasmine Gouédard stated that: "We are now in a very important moment. We realize that we, as Europeans, are equally responsible for European security. While Europe has changed in recent decades, the world has evolved: globalization and the growing interconnectivity have turned regional phenomena into global phenomena. We are faced with threats that we have had to deal with over the years, but which have remained active and should not be underestimated, such as terrorism or organized crime, but also with new challenges such as illegal migration or cyber-attacks."